Note that the code in this tutorial requires Windows 8.1 or Windows 10

This tutorial is closely based on Microsoft's Direct 3D 11 Tutorial 3 but with the code translated from C++ to BBC BASIC for Windows. You should refer to the original for a detailed explanation of the code. 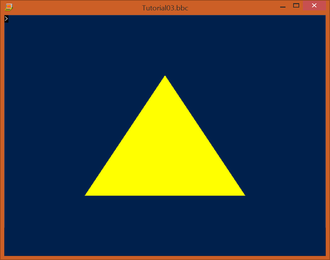 
In the previous tutorial, we set up a vertex buffer and passed one triangle to the GPU. Now, we will actually step through the graphics pipeline and look at how each stage works. The concept of shaders and the effect system will be explained.

Note that this tutorial shares the same source code as the previous one, but will emphasize a different section.


The source files, libraries etc. may be downloaded from here.


In the previous tutorial, we set up the vertex buffer, and then we associated a vertex layout with a vertex shader. Now, we will explain what a shader is and how it works. To fully understand the individual shaders, we will take a step back and look at the whole graphical pipeline.


In Direct3D 11, shaders reside in different stages of the graphics pipeline. They are short programs that, executed by the GPU, take certain input data, process that data, and then output the result to the next stage of the pipeline. Direct3D 11 supports three basic types of shaders: vertex shader, geometry shader, and pixel shader.


Vertex shaders are short programs that are executed by the GPU on vertices. Think of vertex shaders as C functions that take each vertex as input, process the input, and then output the modified vertex. In the Direct3D 11 tutorials, we will write our shaders in High-Level Shading Language (HLSL). Recall that our vertex data has a 3D position element, and the vertex shader will do no processing on the input at all. The resulting vertex shader looks like the following:


In the application code, we will need to create a vertex shader object and a pixel shader object. The code is demonstrated below:


After walking through the graphics pipeline, we can start to understand the process of rendering the triangle we created at the beginning of Tutorial 2. Creating Direct3D applications requires two distinct steps. The first would be creating the source data in vertex data, as we've done in Tutorial 2. The second stage would be to create the shaders which would transform that data for rendering, which we showed in this tutorial.

Except where otherwise noted, content on this wiki is licensed under the following license: CC Attribution-Share Alike 4.0 International