Here you can link to screenshots and demos etc. of programs made using BBC BASIC
6 posts • Page 1 of 1

I have been learning BBC Basic and set out to do a project to test some DSP algorithms and thought I would share the progress. I have developed a program that generates a sawtooth wave wave made up of harmonics all the way up to the Nyquist frequency, it then plots the output sawtooth as red and all the harmonic sines that make up the sawtooth as white.
I intended to add generation of other waveforms such as square and triangle, and allow the parameters such as the fundamental frequency and sample rate to be set from the UI. I also eventually plan to get the waveforms playable as audio at some point.

The array lib has been pretty useful for this project, I recommend using it if you are doing projects where you are using arrays and doing operations on them like multiplication. 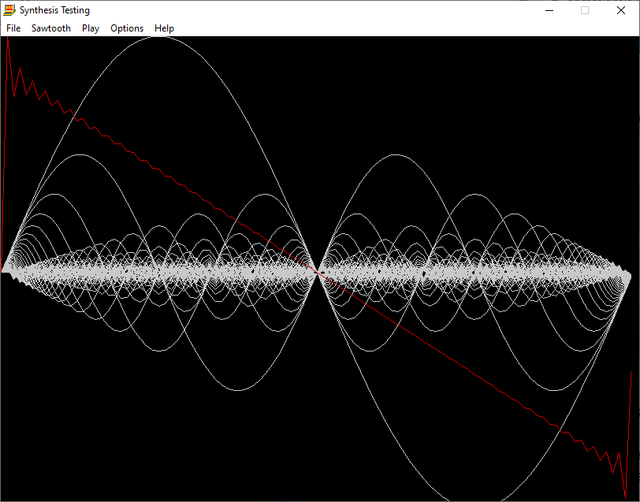 I've now got it to animate the composition of a sawtooth via adding the harmonics one by one so you can see how the output wave is composed by adding successive harmonics.

(click on image to see the animated gif)
Top

Nice! Quite impressive how fast it gets quite close to a sawtooth.

I was quite surprised at how fast it was generating that sawtooth up to Nyquist just adding SIN()'s. I could go further but I'm basing it off CD quality 44100hz sample rate.
I intend to look at getting it to play back via audio at some point.

Has been a really fun little project to do to get into BBC Basic.
Top

can you show the source code?
Top

I will do once I got a few more things implemented.
Top
6 posts • Page 1 of 1

Return to “Support and Promote”